2 versions down, 2 more to go.  All I can say about the IMAX 3D version, it’s an amazing visual treat that made the robots more real than the humans.  In the words of another animated hero I like, Po, it was AWESOME.  Yes, I wasn’t crazy about the story to begin with.  The IMAX 3D version made me wish Michael Bay dropped the whole love story and kept it just between Sam and Bumblebee.

The scene where Sam had to watch Bumblebee be held as prisoner and about to be executed drew more emotions than the scene when Sam is reunited with his girlfriend.  Also, I know Megan Fox said some dumb things and needed to be fired but seriously, after watching your boyfriend die and resurrected, you don’t just dump him!!  So like I said, with talking metal crashing robots, you should keep the story simple and focus on the robots.  Maybe it’s for the guys but I think if you left the hot girl out of this particular movie, they’ll still go watch the movie.

They didn’t do the first bit but most definitely kept a lot of focus on the robots.  The IMAX 3D version made me appreciate the CG work even more.  I could possibly be bias but the betrayal Optimus felt from Sentinel came through so clearly in the animation.  These artists really knew what they were doing.  I cannot stress this enough, the acting from the Robots were much more emotive than some of the human actors … namely Miss Butter Face, Rosie Huntingon-Whitely.  Nothing wrong being a Butter Face, I’d be happy if someone reckon I was one but as hot as she is, the girl really can’t bring it to the table as an actress.  Every time the love story came on screen, I swear I’d fall asleep.  Even her scene with Megatron seemed so so unreal, which I didn’t think is possibly considering it’s a movie about talking larger than life robots … what could be unreal?  Well, the hot girl can be.  Now if Megatron had squished Carly like an annoying bug, the scene may have worked for me. 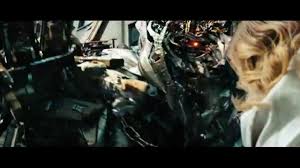 Thankfully, there weren’t many scenes that were just humans and the numerous scenes of the robots made it worth the $22 for the IMAX 3D version.  If you’re going to watch this twice, I’d suggest the 2D and then the IMAX 3D version.  For me the 3D wasn’t great, I still prefer Avatar where James Cameron created a whole new world and immersed you into it.  The 3D for Transformers wasn’t bad but it didn’t immerse me into anything, it was just a bigger and better sight.  The 2D version prepared me for what to pay attention at in the IMAX one.  Still, there were a lot that I felt I still missed.  So the regular 3D version tomorrow should do the trick for me.