It's day 3 in Pasadena and the Cineposium is going very fruitful actually … I'm learning quite a bit but does it have to be so beautiful outside?

Day03
Look at that!!  This was the sight I walked out to during a break … beautiful, huh?  But after 15mins I had to go back indoors … that's the sucky part about traveling for work.

Yesterday night, the AFCI opened the Cineposium with a dinner at The Huntington where movies like My Best Friend's Wedding, Intolerable Cruelty, Cruel Intentions, Wedding Planner and even Memoirs of a Geisha were partially shot there.  The gardens even house a library and a museum, it was pretty cool only except I wish we were there during the day so that we could have seen the gardens … oh well, here's the sculpture that caught my eye … 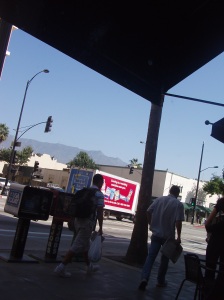 What do you do when it's a beautiful day and it's your first day in a new city and you're up early from jet lag?  I walked around, found a Starbucks … had what I always have in Singapore – Chai Latte with soy milk and a bagel with cream cheeeeeeeeeseeeeee and enjoyed the blue blue skies.  Hope the blue skies are back when I get back home too …

I left Singapore Oct 25 at 1610hrs and arrive in LAX Oct 25 at 1745hrs … after clearing through customs, Michelle and I got on to the shuttle at 1800hrs only to arrive at our hotel in Pasadena at 1945hrs … in other words, it took us longer to get to our hotel from LAX than it did for us to get from Singapore to US … traffic in LA at rush hour is not recommended.

If you haven't seen Infernal Affairs where Andy Lau and Tony Leung were the the true epitome of struggling bad/good guy and good/bad guy, please watch The Departed.

If you have seen the original, just wait for the DVD unless you're a Leonardo, Mark or Jack fan.  Only then can one appreciate the movie … that or you're really into bloodshed which the movie has, in my opinion, too much of 😛

In a nutshell, Martin Scorsese was the only one who disappointed me in the film.  Maybe I had expected too much but the last shot killed any appreciation I had … if you really want me to spoil it for you … email me.

Other than that, Leo was incredible … not as good as he was in What's Eating Gilbert Grape but nonetheless he played the tortured vulnerable good/bad guy to a 'T', you couldn't help but want to hug him and take his pain away.  Like my dear friend, Cherry pointed out 🙂

Mark Wahlberg was the other one who made his character work.  He showed that even in a typical straight lace cop outfit and a bad haircut, he is the Calvin Klein model on the inside.

Again, the plot didn't quite work for me and I think it's because I saw the original where the emotional struggle was much more believable.  After the movie, Jordan and I just wanted to get the DVD for Infernal Affairs … so I know what I'll be doing this Hari Raya holiday.

So Selamat Hari Raya Adilfitri everyone!!

Just when we thought there's no good movies to watch, a couple of us trooped down to GV and watched Woody Allen's Scoop … I'm please to announce it was fun fun fun. *clap clap*

The film defined by GV as an arthouse film and made us pay S$10 on a Monday evening for it.  How? Why? What? When?  I don't know.  We were even more confuse after the movie when we checked out Little Miss Sunshine and that's not considered an arthouse film … so who's classifying these movies at GV?  I want that job 🙂

Anyway, back to Scoop, perfect example on how a simple script and a couple of well timed actors are all you need for a good film.

A simple whodunnit that was funny too.  Hugh was yummy beyond words and Scarlett was sweet, something different from her usual and lacked a sense of confidence but I guess, that's part of the character too.  I prefer her sensuous and pondering.  Woody was Woody.

Soo Wei asked if it was better than Matchpoint?  No, not at all … Matchpoint wins hands down because it was so damn clever and made you look at those bags for tennis rackets a little differently.  Yes, I'm talking to you Jules, you have to go watch it 🙂

Moonbeams through the clear sky.

Under the brave yet barren tree.
It rained heavily this afternoon.
Just like the cold showers yesterday.

It was quiet as it dawned upon me.
That I was so very mistaken.
Everyone saw through my wall.
The strong facade that made me weak.

Like a fragile dainty stained glass.
My ego, desires covered me.
Like an umbrella from the rain.
The rain that flows into the ocean.

Under the brave and barren tree.
The moonbeams shines through the glass.
The umbrella folds down slowly.
The branches like arms hold me close. 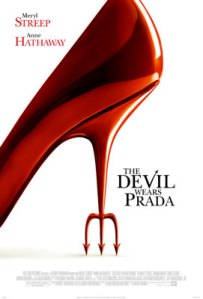 And as always girls win!!  Sometimes I wonder why do boys even bother *swift roll of the eyes*

Went to watch Miami Vice and let's just say that compared to teen flick Devil wears Prada which was a good thing that it leaped from page to screen, Miami Vice should have remained a good eighties TV series.

I remember Don Johnson spouting the cheesey lines but it never was cheesey … always just a little too cool … I mean, come on … who can argue that he was not suave in sock-less loafers.

Colin Farrell, on the other hand, just made me feel sorry for Gong Li who BTW was beautiful as usual.  And Jamie Foxx, was he even in the movie?  Enough said.

So that's my verdict:-

Devil wears Prada
Watch it now before the run is over … and if it is, catch it on your next plane ride … and if you still miss it then grab it on DVD.

Miami Vice
Wait … wait … and then wait somemore … and if you're REALLY bored and it happens to be on TV and you REALLY have nothing else better to do, watch it … it'll lull you into a well deserved nap 🙂

It's 6:30 in the morning and I'm up.  Why?  I was suppose to be on the way to the airport to pick my Dad up.  His plane landed way ahead of ETA (which begs the question what's the point of ETAs), so I rushed through my morning routine and was just about to open the door when my phone rings.  It's my Dad.

Dad: Hi Darling, my plane landed early.
Me: I know, I checked it up on teletext.
Dad: I'm in a cab on the way home so no need to come already.
Me: I'm all ready already.
(why does it sounds so much more Singlish when I'm typing it out :P)
Dad: It's ok, coming home already.

So here I am early on a Friday morning with nothing else better to do but to blog on the next other city that feels like home – Perth, Western Australia.  Yes, there are times when I feel homesick for the place that I was fortunate to have had spent a number of years living in.

Now with my parents living there, I get to visit them nearly every year and landing in the Perth International Airport always brings on a comfortable laid back me that I often forget to be in vibrant Singapore 🙂

Anyone heading that way and need itinerary ideas? Or a good place to stay?

For the last 4 years, October comes around, I pack my bags and head off to Cannes … nope, not for a Southern French holiday but for one of TV's busiest market – MIPCOM.

With my new job, I'm giving it a miss this year … it's a little with mix feelings, I'll miss checking out the new shows and seeing what's going to be hot next year … but thankful that I'm not confused about what to eat and definitely happy I'm not transiting through crazy Parisian or London airports where chances of losing your luggage is higher than them getting to their final destinations.

To all my friends who are heading off this Saturday night for MIPCOM, have fun at the market and take a quiet stroll along the beach for me!!!